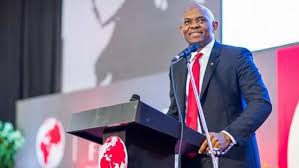 Of course, except you carefully read and digest the contents of that beautifully knitted article, you will want to puncture Momodu’summation about Elumelu, as some un-informed critics are wont to do.

But those who know the essential Elumelu better would tell you that Momodu had not exaggerated in his description in any way.

Unlike some others on the verge of retiring, Elumelu, an international renowned businessman never nursed any fears of retiring into irrelevance or obscurity.
Indeed, when he was retiring from UBA at 47, he already had a vista of some potentially great plans laid before him, one of which is the
Foundation.

In launching the Foundation, Elumelu, who was born on March 22, 1963, clearly spelt out its objective: “to prove that the African private sector can itself be the primary generator of economic development.

The Foundation is charged with the mission of driving Africa’s economic development by enhancing the competitiveness of the African
private sector.

“As a premier pan-African-focused not-for-profit institution, the Tony Elumelu Foundation is dedicated to the promotion and celebration of entrepreneurship and excellence in business leadership across the continent.”

Interestingly, Elumelu, also the Chairman of Heirs Holdings has remained
very faithful to his seeming vow with humanity. Some years ago, he
pledged the sum of $100m to empower 1,000 entrepreneurs at $10m per
annum over a period of 10 years.

Also , as proof of his commitment to eradicate poverty and reduce unemployment across Africa, Elumelu, few weeks ago, gathered notable personalities from all walks of life for the fifth edition of the Tony Elumelu Foundation Forum.

The three-day event with the theme” Empowering African Entrepreneurs” held at the Transcorp Hilton in Abuja.

Since the widely publicized event held, it has been generating critical discourses across the globe. Without a doubt, the event has further
highlighted is abiding desire to give promising African youth a lift.

In order words, the Delta State-born multiple investor has offered himself as an angel of hope to many.