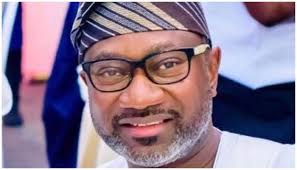 When Femi Otedola woke up on Sunday, November 10, so many thoughts had occupied his mind.

But there is no doubt that attending the Gala Dinner organised by his daughter, Florence Otedola, aka DJ Cuppy, in support of the Save Our Children vision later in the day at the prestigious Transcorp Hilton Hotel, Abuja was topmost in his itinerary.

It is not impossible that the Otedola, Executive  Chairman of Geregu Power Plc, must have made very brilliant contributions, as may be necessary, to the success of the event put together by his multiple award-winning daughter.

But what the richest man in the South Western part of Nigeria  obviously didn’t share with any soul, as the day drew nearer, was what he intended to offer as financial support towards the cause during the event.

A few hours into the evening of fun, when the fate of the victims of the Boko Haram insurgency in the North Eastern part of the country, was again foregrounded and being critically examined by concerned individuals, government functionaries and corporate organizations, the Lagos State-born multibillonaire businessman shocked the world with a personal donation of a whopping sum of N5bn!

If asked if he had thought it out, he would have, bumming with his wonted effervescent smile, answered in the affirmative. He would have also told you that he did not give out such a humongous amount of money to lift the souls of the affected persons or to the promoters of the Save Our Children because his lovely daughter was involved. He would have also probably told you that he did not need the money to buy 39 units of 2019 Rolls Royce, 92 units of 2019 Mercedes G-wagon, three luxury apartment in New York,250,000 bottles of Hennessy Cognac, 395 units of 2019 Tesla model three electric cars, seven vintage Yarch or even start a luxury private jet business with seven cirrus vision jets cause he knew the money could be used for the sake of humanity .

When he made the announcement, the hall did not only literally rise and tumble in joy, his daughter, in particular, was indescribably over-joyed and felt greatly proud of his father’s act of magnanimity.

As it would be expected, his gesture, which the Vice President described as the biggest donation ever by an individual in Africa to the cause, has been trending on the social media.

But those who know him too well say giving is almost his second nature.

It will be recalled that Otedola, in 2017, had dazzled at the Augustine University’s Fundraising and Founders’ Day event held at the Muson Centre, Onikan,  Lagos, where he was the Chief Launcher.

On that occasion, he  had reportedly  wowed  when he  made a  pledge to donate a well-equipped Faculty of Engineering building to the institution, which will be worth over N500million.

A few months after, the shrewd businessman  fulfilled his promise, when he laid the foundation of the building in the presence of the  Catholic Archbishop of Lagos, His Grace Most Reverend (Dr.) Alfred Adewale Martins and his mother, Lady Doja Otedola, among other notable personalities.

Among his other acts of uncommon generosity and fellow-feeling, he came to the rescue of ailing popular thespian, Victor Olaotan, last year, when he needed over  $100,000 for treatment of an injury he sustained in a ghastly auto accident in 2016.

The veteran actor received the much-needed but expensive neuro-rehabilitation treatment that saved his legs from being amputated, courtesy of the Lagos State- born business magnate’s kindness.

Interestingly, since the beginning of this year, the businessman has not only rededicated his energy into giving, he has channelled  billions of Naira into charity.

For instance, the benevolent billionaire took  up the medical expenses of the famous reggae icon, Majek Fashek, who was terribly sick and stranded in London.

In line with his avowed commitment to lending a helping hand to his needy compatriots, Otedola, again, helped a dying soul, Christian Chukwu.

Immediately news broke that the former Green Eagles skipper needed $50,000 to complete treatment for prostate cancer which had affected his leg, Otedola was said to have called him and promised to foot the bill at the Wellington Hospital, London.

He could not imagine the man who had made the country proud in the past as the captain of the first Nigeria team to win the African Nation cup continue to writhe in pains.

In May this year,  Otedola also came to the aid of Peter Fregene, a former Green Eagles goalkeeper, who had been bedridden since 2001.

In 2017, Daba, who had been battling leukaemia and prostate cancer for the past few years, returned to Nigeria from the UK ,where he went for medical treatment.

The ace broadcaster also revealed that he was diagnosed with prostate cancer in November 2017. This was barely months after he was hospitalised due to leukaemia.

It is a fact that the billionaire energy magnate does not court media attention needlessly. Yet, almost every move he makes, either in his business or private life, has never escaped the attention of newshounds.

Such is the life of this business  mogul who has become an angel of hope to many and a God-sent to his compatriots who have been visited by the vicissitude and lassitude of life.

Another Exciting chapter in US based, Lola Fashina’s Memoirs