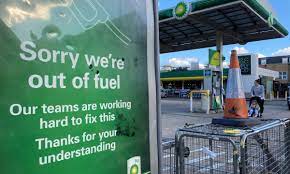 Panic-buying of petrol is showing no sign of ending in Britain, with retailers warning that filling stations in many parts of the country continued to run dry.

Long queues were again reported outside stations that were open on Tuesday after the government announced it was putting the Army on standby in an effort to ensure supplies were maintained.

Oil companies have said they expected the pressure on forecourts to ease in the coming days, with many cars carrying more fuel than usual.

However, the chairperson of the Petrol Retailers Association (PRA), Brian Madderson, said that there was little sign of that happening with social media driving the dash to the pumps.

“Disappointingly, the messages I’m getting this morning from our retailers are that panic-buying does continue,” he told the BBC Radio 4 Today programme.

“One of the reasons for this is social media. As soon as the tanker arrives at a filling station, people on social media are advising that a tanker has arrived and it is like bees to a honeypot.

“Everyone flocks there and within a few hours it is out again.’’

Ministers had announced late on Monday that soldiers were being put on standby to deliver fuel, amid concerns that a shortage of tanker drivers was threatening the ability of the oil companies to maintain supplies.

Prime Minister Boris Johnson originally drew back from activating Operation Escalin first drawn up to deal with the aftermath of Brexit for troops to fill in and drive tankers.

The government had been hoping that the queues would ease as people returned to more normal buying patterns.

However, Business Secretary Kwasi Kwarteng, who issued the Military Aid to the Civil Authorities request, said putting troops on readiness to assist was a “sensible, precautionary step’’.

“If required, the deployment of military personnel will provide the supply chain with additional capacity as a temporary measure to help ease pressures caused by spikes in localised demand for fuel,’’ he said.

It was reported that, initially, 75 drivers would be given additional training to enable them to drive tankers, with a further 75 available if required.

The ministers have repeatedly urged the public not to panic buy, insisting the country has “ample” supplies of fuel.

However, the calls appeared to fall on deaf ears, with the PRA reporting that many motorists, when they were able to find a filling station that was open, were taking on far more fuel than usual.

“It is panic-buying when you go to fill up your car to the entirety of its tank capacity which you will not normally do. You will fill up,’’ Madderson said.

Meanwhile, the government continued to face calls to give priority access to fuel supplies to health care staff and other essential workers.

David Wrigley, deputy chairperson of the British Medical Association, warned essential services could be hit if staff were unable to get to work because they could not fill up.

“I know many of my health and social care working colleagues will be getting into the car this morning, nervously looking at the fuel dial and wondering if they’ve got enough fuel to do their day-to-day work,’’ he told Times Radio.

“We can’t be waiting two or three hours in a queue for fuel when we have patients to see.

“Its a critical situation where we’re unsure we’ll have the fuel to do NHS and social care work, so a plan does need to be in place.’’

The NASUWT teaching union said priority access should also be given to teachers if children were not to face further disruption to their education.

General secretary Patrick Roach said: “for many teachers, the use of public transport is simply not an option, with many schools in areas that are not easily accessible other than by using private vehicles.

“Without such intervention, many teachers will struggle to get to their places of work on time, adding to the daily uncertainty and disruption faced by children and young people.’’

57 / 100
Powered by Rank Math SEO
Related Topics:petrol
Up Next

Why Journalists’ Salary Must Be Paid As And When Due – NUJ