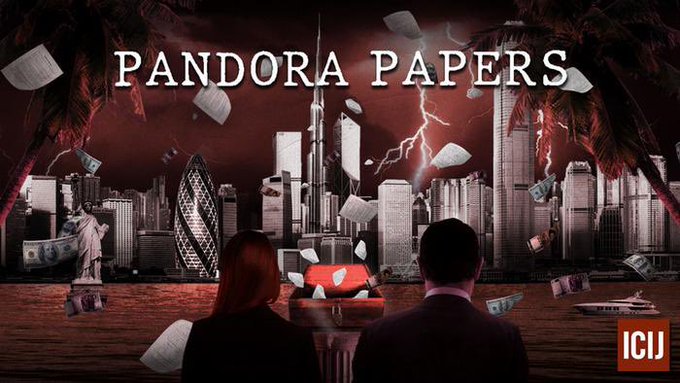 A massive investigation under the umbrella of Pandora Papers is currently ongoing, leaking how world leaders, business moguls used offshore tax havens to hide assets worth hundreds of millions of dollars.

Pandora Papers investigation is based on the leak of some 11.9 million documents from 14 financial services companies around the world by 600 journalists from media including The Washington Post, the BBC, and The Guardian.

The Pandora Papers released, on Sunday, October 3, 2021, were analyzed by the International Consortium of Investigative Journalists (ICIJ), a nonprofit newsroom and network of journalists centered in Washington, D.C. Some current and former leaders are featured in the documents and will be facing allegations ranging from corruption to money laundering and global tax avoidance.

Based on the most expansive leak of tax haven files in history, the investigation reveals the secret deals and hidden assets of over 330 politicians and high-level public officials in more than 90 countries and territories, including 35 country leaders.

Ambassadors, mayors and ministers,  presidential advisers, generals, and a central bank governor appear in the files.

Where Are The 336 Politicians In The Pandora Papers From? 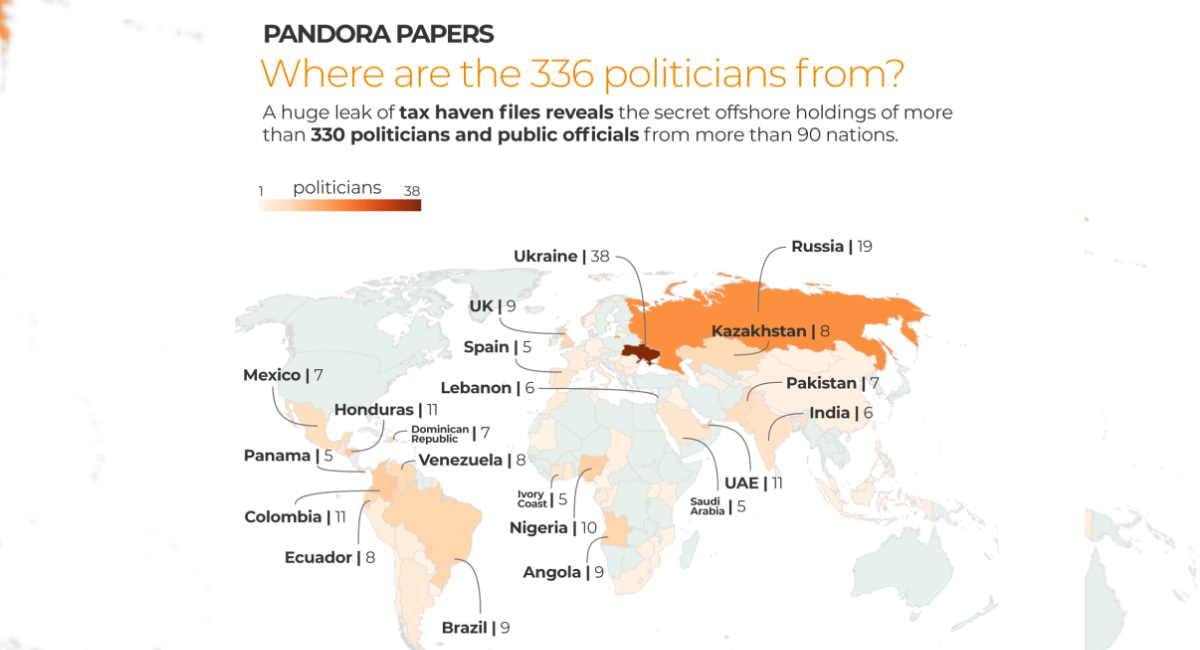 Some of the names are listed below:

Who has been named?

Among significant individuals named are is Kenyan President Uhuru Kenyatta, who, along with six of his family members, was revealed to own 11 offshore companies containing $30million worth of assets.

Obi first set up Gabriella Investment in 2010 in the British Virgin Islands, which he didn’t declare in his asset form.

“Mr Obi has also now created a trust known as The Gabriella Settlement, an entity also registered in the BVI.

“According to Fidelity Investments, a trust is a fiduciary arrangement that allows a third party, or trustee, to hold assets on behalf of a beneficiary or beneficiaries. Experts believe that trusts are traditionally used for minimizing taxes even though they can offer other estate plan benefits as well.

“By the current structuring of Mr Obi’s wealth and offshore businesses, The Gabriella Settlement, which appears to hold all or a majority of his assets, is the sole shareholder of PMGG Investments.

“In turn, a New Zealander entity, Granite Trust Company Limited is the sole trustee of The Gabriella Settlement. Sam Access International, the Monaco-based secrecy enabler Mr Obi first hired in 2010 to set up his offshore structure, was until August 23, 2019, the sole shareholder of Granite Trust”.

Others include Jordan’s King Abdullah II who was alleged to have used offshore accounts to spend more than $100m on luxury homes in the UK and US.

Days ahead of the Czech Republic’s October 8-9 parliamentary election, the documents allegedly tied the country’s prime minister, Andrej Babis, to a secret $22m estate in a hilltop village near Cannes, France.

The Papers also listed Kenya’s President Uhuru Kenyatta and his mother as beneficiaries of a secretive foundation in Panama.

The leaked document also showed that three of Kenyatta’s siblings own five offshore companies with assets worth more than $30m.

Prime minister of Pakistan Imran Khan’s cabinet ministers and their families were shown to own millions of dollars worth of offshore companies.

President of Ukraine Volodymyr Zelensky was shown to have moved his stake in a secret offshore company just before his victory in the 2019 election.

Azerbaijani President Ilham Aliyev and his family and close associates snapped up more than $500million (£400million) worth of property in the UK – consisting of 17 properties, including an office block in London for $44.6million (£33million) for the president’s son Heydar Aliyev, aged 11.

They also appeared to have made a $41.9million (£31million) profit after selling a London property to the Queen’s Crown Estate, which is managed by the Treasury.

Former British prime minister Mr Blair and his wife Cherie saved some $434,000 (£321,000) in stamp duty when they bought an office in London by purchasing the offshore company that owned it. amongst others.

Ifalade Ajasa with His Men

Ifalade said this while speaking to Corp Superintendent from the 57 LGAs and LCDAs at a special briefing held at the Corp headquarters, Oshodi.

At the meeting, He advised Corp Superintendents to raise their level of preparedness through regular drills and security advocacy with officers of the agency.

Dr Rasak Balogun, the Executive Secretary of the Lagos State Security Trust Fund paid a surprise visit to the Agency and also enjoined officers to imbibe the culture of Multitasking in the face of the expected challenges officers will confront in view of the forthcoming Elections amid other security issues.

Prince Oyekan on behalf of the Agency, thanked Dr. Rasak Balogun for his usual support while assuring the general public of the Agency’s readiness to meet the challenges expected from the high octane politics, and sundry safety and security issues. 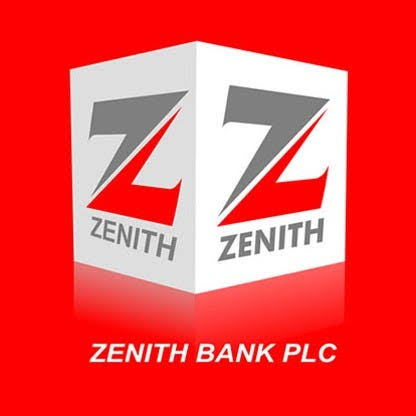 Contrary to the widely reported fake news by some faceless online news platform that Justice Olubunmi Abike-Fadipe of the Ikeja Special Offences Court in his recent judgement allegedly accused foremost financial management in Nigeria, Zenith Bank of fraud and bribery, the astute judge who is bitter with such report have released the original certified True Copy.

In the original certified True Copy, it was confirmed that the respectable Justice never said something of such while delivering her judgement.

According to Justice Olubunmi Abike-Fadipe, all what the online media platforms said she delivered, were all fake and wondered how and where they got their own reports.

The certified True Copy (CTC) of the judgment is now in the open for anyone to see.

These online platforms had reported that the Justice accused Zenith Bank Plc of bribing both the judges and lawyers for 11 years to pervert justice, with several online media outlets alleging that Justice Olubunmi Abike-Fadipe made the claim on Tuesday, March 8, 2022 while delivering judgment in a suit marked LD/ADR/186/2014 between Real Integrated and Hospitality Limited as claimant and Zenith Bank Plc and State Universal Basic Education (SUBEB) as first and second defendants respectively.

One such publication quotes the judge as saying “My recommendation is that Zenith Bank is a fraud and people must be very careful in their dealings with the bank.”

Some of the other quotes read: “Zenith Bank bribed the lawyers in the matter.

“This they have done for 11 years. So many lawyers and judges have been bribed in this matter just perverting justice. What is more embarrassing, the current governor of Central Bank of Nigeria, Godwin Emefiele was the one who came to navigate and begged for the deposit. He has not been able to do anything to Zenith Bank because he was the managing director of the bank at the time of this transaction.”

However, nowhere in the Certified True Copy (CTC) of the judgment that was made available to credible news platforms showed that the Judge did not make such statements.

While the Judge did make a scathing criticism of the bank, Justice Fadipe did not accuse Zenith bank of bribing judges and lawyers for 11 years to fraudulently alter the course of justice, as claimed by the online mediums.

There was also no mention of the Central Bank of Nigeria, Godwin Emefiele in the CTC of the judgment.

The judge’s comments, as contained in the judgement, include: “The 1st defendant has been the beneficiary of the malevolent game of chess it plunged both claimant and the 2nd defendant into, holding the sum of N872,780,552.84 in its custody without paying interest thereon from 17th February 2011 until 2nd February 2016 when the Court ordered that the money be paid into an interest yielding account in the names of the claimant and the 2nd defendant pending determination of the suit, which order was curiously varied by the consent of all the parties on 20th September 2016 so that the money remained in the 1st defendant’s custody without interest.

The judge made the comments while granting the claimants four reliefs.

The reliefs are that the 1st defendant (Zenith) was in breach of contract when on 7th October, 2011 it refused the claimant to draw from its account No. 1012465427 “despite the fact that the said account was in enough credit to cover the withdrawals sought to be made on the said date.”

The judge further restrained the bank “from disturbing or refusing the claimant from operating its account No. 1012465427 in the 1st defendant’s bank or from honouring the claimant’s transfer or payment obligations to third parties from the said account as long as same is in credit.”

It granted an “interest of 15% per annum on the sum of N872,780,552.84 from 7th October 2011 when the 1st defendant denied the claimant access to the funds in its account which was in credit at that date till judgment.

“Interest on the judgment sum at the rate of 10% per annum from judgment date till final liquidation thereof.

“Costs of this action in the sum of N2.5million.”

Of a truth, Zenith Bank has had a record of open and transparent operations, this earned the organization four SERAS CSR Africa Awards that include “Best Company in Reporting and Transparency”, “Best Company in Infrastructure Development”, “Best Company in Gender Equality and Women Empowerment”, and the coveted “Most Responsible Organisation in Africa”.

Zenith Bank has continued to distinguish itself in the Nigerian financial services industry through superior service offerings, unique customer experience and sound financial indices. The bank remains a clear leader in the digital space with several firsts in the deployment of innovative products, solutions and an assortment of alternative channels that ensure convenience, speed and safety of transactions.