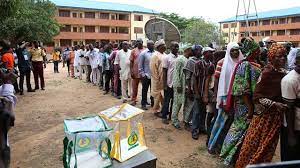 Mohammed Idris, the Chairmanship candidate of the All Progressives Congress (APC) for Nassarawa Eggon Local Government Area of Nasarawa State, has urged the electorate to vote peacefully during the local government election in the state.

This, he said, was in the interest of peace and for the overall development of the area and the state at large.

Idris, who is seeking for re-election, made the appeal on Monday during his campaign rally in Nassarawa Eggon Local Government Area of the state.

He promised to accord topmost priority to the provision of security and infrastructural development, if elected on Oct. 6

Idris stressed that his re-election for a second term in office would enable him to provide more of the much-needed dividends of democracy to the electorate.

“I am here to appeal to you to vote for me, my deputy and all the candidates of our great party, APC.

”I will continue to give peace and infrastructural development the topmost priorities they deserve, as no society will progress without peace.

“I will also continue to provide more of the much-needed infrastructure to your communities.

”This is to boost your agricultural and socio-economic activities and to improve on your standard of living,” he said.

He also solicited for the support of the people of the area to enable him and all the councillorship candidates of the party come out victorious at the polls.

He further urged the people to support President Muhammadu Buhari, Gov. Abdullahi Sule and other leaders to succeed.

Mr Mohammed Usman, the state Financial Secretary, APC Caretaker Committee; Mr Raymond Akolo, and Mrs Mary Enwongulu, former legislators at the state legislature, respectively, also urged the people of the area to vote all the candidates of the party.

They also called on the electorate to support Gov. Abdullahi Sule’s administration to succeed for them to enjoy more dividends of democracy.

Earlier, Mr Umar Gombe, the Director-General of Danlami Idris Campaign Organisation, appealed to the people of the area to vote all APC candidates during the election.

“We are appealing to you to vote Hon Mohammed Danlami Idris for Chairman, his deputy and all APC candidates during the forthcoming local government election in the state,” he said.

Idris and his entourage also paid homage to the traditional rulers of all the electoral wards which they visited and received royal blessings.

57 / 100
Powered by Rank Math SEO
Related Topics:LG Poll
Up Next