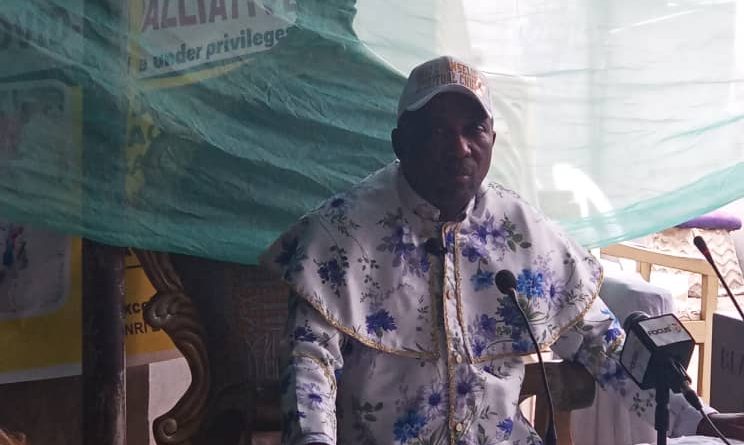 Popular prophet, Primate Elijah Ayodele is one prophet who has spoken consistently about the gubernatorial election in Anambra. He started before the primaries up till this moment and his last prophecy was talking about the candidates and their stand in the soon coming elections.

‘‘’People are tired of APGA, they don’t want APGA but the party wants to enforce power through rigging, they are not getting it right. Governor Willie Obiano isn’t doing his homework properly and it will affect their victory. Nobody is ready for APGA and APC in Anambra but both of them are bent on taking it by force. Except Governor Willie Obiano begs the people of Anambra and prays to God, the people will not vote for APGA.’’

For YPP and PDP, Primate Ayodele stated that both parties have what it takes to win the election and advised them on what to do.

‘’PDP has what it takes, they have the resources but except their candidate, Valentine Ozigbo does the necessary things, he won’t win. A coalition will help PDP more to get their chances. If they do what is right, they will get it. Unless PDP wakes up, gets a coalition and puts their house in proper order, they will not be victorious, they should manage things properly. Three days to the election, things will start changing, PDP should prepare well.

‘’A Coalition will send APC off the race but other parties don’t see beyond their nose and by this, they will create chances for APC to win in an ungodly way. The people don’t want APC and APGA. If PDP can utilize the opportunity, they can win.

‘’YPP candidate, Ifeanyi Ubah is not ready to take victory, victory is surrounding him but he isn’t ready for it. They will ease him out technically, he is getting some things wrong except he does the needful. He has what it takes but he isn’t managing it, he is playing around the victory and people are not seeing him as well prepared for the election victory. The victory is close to him but he doesn’t know how to claim it.’’ (https://dailypost.ng/2021/10/12/anambra-guber-primate-ayodele-reveals-election-outcome-in-fresh-prophecy/)

However, since yesterday, there have been stories flying in the internet that Primate Ayodele prophesied that Ifeanyi Ubah will win the election. This has been posted on mainstream news platforms like the Sun newspapers, and other online platforms.( https://www.sunnewsonline.com/primate-ayodele-says-ifeanyi-ubahll-win/)

Going by the prophetic statement and what is currently spreading, it is important to note that they are two different things and the man of God never stated that Ifeanyi Ubah will win the election.

For Ifeanyi Ubah, Primate Ayodele even noted that the people are not seeing him as a serious candidate and that he doesn’t know how to claim victory. He went ahead to categorically state that he will eased out technically except he does the needful. With this statement, Primate Ayodele never said Ifeanyi Uba will win but advised him on what he needs to do if he wants to win. He wasn’t the only one in this category, the PDP candidate was also advised on what to do to win the election.

Where then did those sponsoring stories to favor Ifeanyi Ubah get theirs from? The facts are available on the social media and there was never a time Primate Ayodele made a statement that YPP and Ifeanyi Ubah will win the election.

However, this is not the first time Primate Ayodele’s prophecies will be twisted by some elements for political gains. In 2018, Primate Ayodele released a statement that only Saraki can unseat Buhari and that can only happen if the PDP gives him the presidential ticket but unfortunately, they didn’t listen and they lost in the election. After this, there were verbal attacks against Primate Ayodele for saying ‘Saraki will be nigeria’s next president’, meanwhile, there was never a time Primate Ayodele said this.

For Ifeanyi Ubah, it’s obvious his camp are behind the sponsored stories but putting the records straight, Primate Ayodele never said Ifeanyi Ubah will win the election.

#EndSARS A Movement For Human Rights And Good Governance- CDHR

There is a palpable tension in the Alimoso Federal Constituency chapter of the All Progressives Congress (APC) as supporters of House of Representatives aspirant, Prince Idris Balogun, have threatened to defect to another party over the seeming injustice done to the aspirant during the party primaries.
Speaking to journalists over the weekend, the supporters led by their spokesman, Olalere Oyetola lamented that despite that their candidate, Prince Balogun, popularly called Oluomo Kafata, being the most popular and widely accepted aspirant, the leadership of the party gave its Rep ticket to another aspirant.
“We’re supporters of Oluomo Kafata and we are registering our grievances and displeasure at the injustice done to him during the last primaries of the party,” Oyetola said.
According to him, Balogun has been the man who has been driving the party forward in Alimoso Federal Constituency. “He has been empowering people of all cadres: students, women, widows and party members. Over 5,000 people have benefitted and more are still benefitting from his empowering programmes,” he said.
Oyetola stated further that Balogun has been doing everything in the name of the party and he has been able to put the party in the consciousness of the people. “His empowerment programmes have been second to none. This is a man who has purchased buses to convey school children to and from school in the name of the party. He purchased a grading machine worth N100 million used in grading roads. All these are done free of charge and in the name of the party,” he said.
He stated further that Balogun was the consensus candidate of the party. “The primary for Rep could not take place in Alimoso due to violence. Two people were killed on that day. After due consideration, it was decided that Oluomo should be the consensus candidate.
“We were surprised that a kangaroo primary was organised at the party secretariat and schemed him out,” he explained.
According to him, they have to let the whole world know what is happening in Alimoso because supporters of Oluomo are not happy.
“He (Oluomo) has been the one telling us to calm down that the leadership of the party is looking into the problem.
“However, not even him can keep us calm for long. We’re not happy and we may leave the party if urgent steps are not taken to redress the situation,” he said.
Others who spoke with the media at the occasion, confirmed that they have made up their mind to leave the party if the injustice done to their man is not redressed.
“The leadership of the party should know that if Balogun is allowed to leave the party, APC will lose in Alimoso Federal Constituency. He is the most popular candidate, a grassroots mobilizer and the choice of the people. He will win the election on any party’s platform,” he said.
4 / 100
Powered by Rank Math SEO
Continue Reading