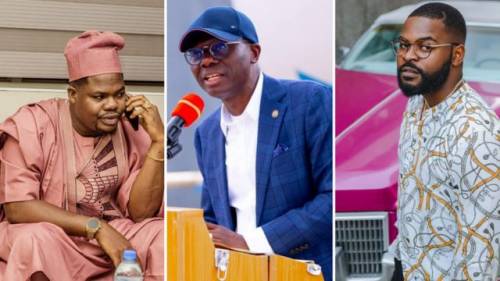 Recall Sanwo-Olu earlier today called on Falz, Mr. Macaroni, other to join in the walk for peace scheduled to hold in December following the damages done during the #EndSARS protest against police brutality.

Replying to the call by the Lagos State Governor, Mr Marcaroni said in a tweet that genuine peacemaking should begin by first implementing the recommendations of the judicial panel set up to investigate the October 20, 2020 shooting of protesters in Lekki.

He said, “I humbly decline the invitation of Mr Governor. The Government themselves set up a panel. The panel has made recommendations. I believe that genuine peacemaking will begin by first implementing the recommendations of the panel. Then we can begin to trust the government.

“Mr Governor has said it in his speech that to be a Centre of Excellence, we have to be a Center of Truth. Before there can be healing, the government has to be sincere. There must be acceptance of wrongdoings and willingness to correct them.”

Falz also said in a tweet that the governor’s “walk of peace” would mean nothing without justice.

“This suggestion of a ‘walk of peace’ sounds like a joke and a very disrespectful one at that. People were murdered in cold blood and absolutely no iota of justice has been served more than a year after. How can there be peace without justice?” the musician asked.

Notable among the invitees by Governor Sanwo-Olu are celebrity campaigners of the #EndSARS movement which include popular musician, Seun Kuti, son of the late legendary singer Fela Anikulapo-Kuti, Dele Farotimi, Temitope Majekodunmi, and Segun Awosanya.