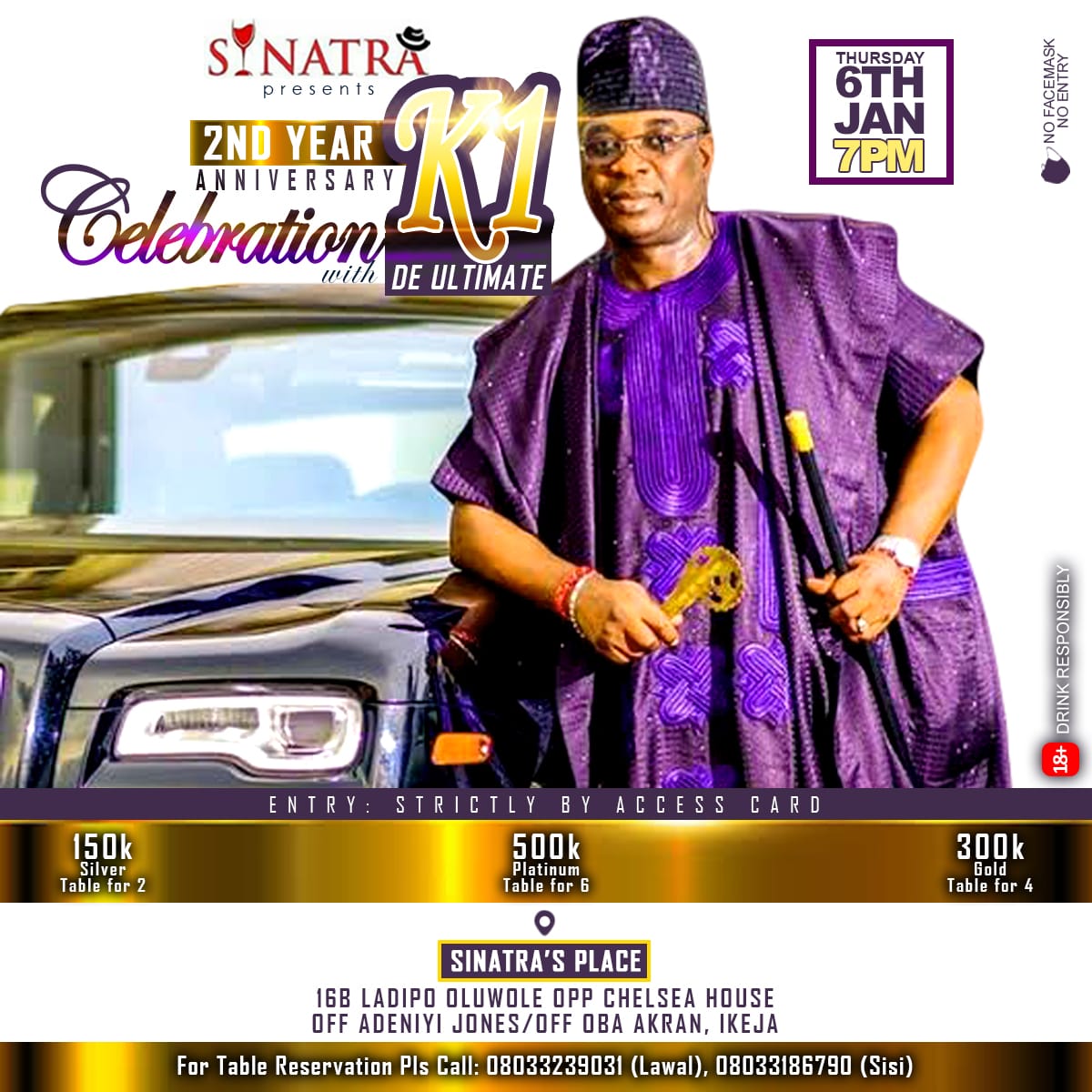 Leading mainland hospitality and entertainment outfit, Sinatra’s Place is set to celebrate its second year as a brand and based on feelers all over social media, leading entertainers like Mayegun of Yorubaland, K1 De Ultimate; songsters Ludare and Mr Solek have been confirmed as those who would create the feel-good atmosphere Sinatra patrons are accustomed.

As a Yuletide bonus, the celebratory season, which has started this December, will see crowd favourite, SB Live serenading on Sinatra stage on Monday, December 27. Thursday, December 30 will feature Ludare in an extraordinary show, while on Sunday, January 2 will see a full comedy and music concert by Mazi and Friends.

The celebratory season will culminate in an explosive fiesta come January 6, 2022, when K1 will man the Sinatra stage to the delight of fun lovers.

Noted for its serene atmosphere, great food and excellent entertainment options, qualities that patrons have stated keep them coming back, Sinatra’s Place has maintained an enviable momentum, hence their two-year success story the outfit is celebrating.

In December 2019, when the Visioneer behind the outfit officially opened the doors of Sinatra, which is located in the upscale Ladipo Oluwole Street off Adeniyi Jones, Ikeja, it served as a breath of fresh air for fun lovers in the vicinity.

Looking back on the journey so far, MD, Sinatra revealed that continuous innovations is one of the secrets to their success. “Others have not been as fortunate in this market, but we are extremely humbled to not only still be here but to be adding new attractions to start our third year of growth,” he stated.

Among other things, Sinatra’s latest addition to the group, the Club House will commence operations in the Valentine season of 2022.

In the meantime, the Black Hut VVIP lounge area for private parties have enjoyed renewed patronage this Yuletide, alongside the dedicated game room with several indoor games like PS5, monopoly, ‘ayo’, chess and others.

“We listened to customer feedback on what is missing from the area, what we needed to do to improve their experience once inside our doors, and we took a little time last year to remodel the layout of the venue. We are always looking for ways to improve the Sinatra experience,” he added.

Expected at the epoch-making events are the movers and shakers of Lagos night scene and its environs, rockers, and ballers among other notable fun-seekers.