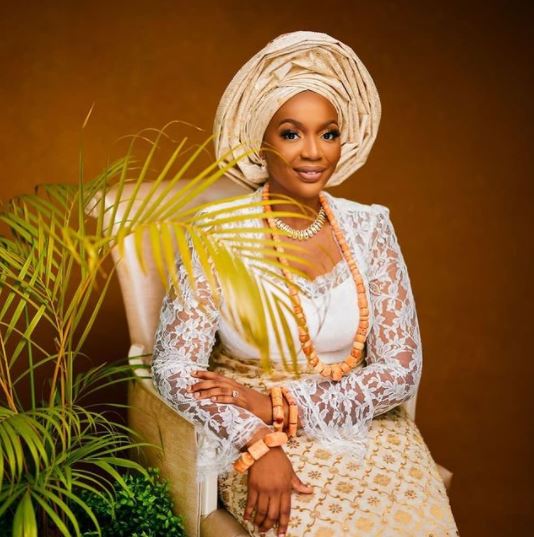 Like fin to fishes, the appendage ‘queen of the hearts’, has come to stick to Her Royal Highness, Ivie Uhunoma Emiko (nee Okunbo). Her life has been a gracious ride to greatness. Born into riches, Olori Ivie is a rare gift to the palace of His Royal Highness Utieyinoritsetsola Emiko, the 21st Olu of Warri, Ogiame Atuwatse III.

Raised among the pantheon and with superfluous experience of all the appurtenances wealth and influence, Olori Ivie grew up with uncommon resolve to live like the common- impacting lives positively with poise and turning the cameras away from her good.

Daughter of the late Nigerian magnate, Capt. Idahosa Wells Okunbo, Olori Ivie is the president of RIG Africa, a Christian ministry impacting lives spiritually and along the line of material needs long before her husband ascended the throne. An elephant never breeds a dwarf. Her father’s philanthropy and humanitarian deeds signposted Olori Ivie’s pedigree and magnanimity. Dad’s own ‘Iye’, Olori Ivie has become the mother to a nation of people just as the stars had foretold.

She’s proud to have inherited more than riches: a good name, which she referenced in the earliest tribute to her father when he passed on last year. Like her husband, Olori Atuwatse III is a devout Christian, passionate and expressive about her relationship with God.

In sync with her husband’s mandate and resolve, she recently launched the WUWU ORE Initiative, ‘Uran ran w ani ale Iwere’ which means light comes into Iwere land in a bid to improve lives and healthcare services to the people of Delta State, particularly the elderly, women and children.

The initiative is geared towards providing palliative care, advanced medical checks, treatments, and medical screening powered by the Olu of Warri Kingdom, Ogiame Atuwatse III, and supported by private and government stakeholders interested in the wellbeing of the Deltans. At the last count, no fewer than 500 people have benefited from a free medical outreach she organized. She desires to touch Deltans in ways never been done before. Olori Atuwatse III said, “The idea is to reach out to those who have no access to medical care and promote good health among the people in the kingdom.”

He added, “My desire is to bring quality healthcare to the people with the vision of making healthcare more readily accessible to all indigenes in our community.” The highlight of the outreach included medical checks and treatment, palliative care, malaria screening, blood glucose screening, urine analysis, and retroviral screening, among others. Part of her dream as the queen is to ensure that every child in the Niger Delta can see their value ahead of time, embrace their uniqueness, and reach their full potential early enough in life. She’d also gone further to disclose the plan of the palace to bequeath an enduring educational legacy in the kingdom.

At the launch of Human Capital Africa (HCA), the maverick queen stated this as a guest speaker at an accountability and advocacy initiative spearheaded by Nigeria’s former Minister of Education and World Bank VP of the African region Obiageli Ezekwesili. She exudes seamless confidence and inspires with all her strength. Recently, she took words of encouragement to the attendees of the Women on the Winning Edge Conference 2022, a female development project hosted by Funke Felix-Adejumo and organized with a focus on Education, Celebrating Womanhood, and Inspiring the female gender.

She was also hosted to a special private reception by the President of Ghana, Nana Akufo-Addo, at the Presidential Villa in Accra, alongside His Majesty, the Olu of Warri, while on holiday in Ghana. Since she became the venerable Olori Atuwatse III of Warri Kingdom, she has braved all odds to be a shining light for many charitable and worthy ventures for women and their plights.

These efforts and more earn her accolades as the ‘Dame of Philanthropy’, especially with an uncommon humility and desire for the development of fellow humans, which account for why she’s not only queen of the palace but Queen of the Hearts. She got applause for championing a free medical healthcare initiative among riverine communities in Warri; that has yet to wane. And she’s off to other selfless labor for the good of mankind.

But in all of her grace and poise, Olori Ivie does not suffer fools gladly.

She puts in the round hole the round pegs no matter whose ox is gored. She’s bent on the lifelong principle of fairness, which she’d admitted is one of the nicest inheritances from her treasured dad. Unlike many of her social stature, with Olori Ivie, it’s no airs, no pretences. Her close allies often attest to how much disgust she feels about flaunting vanity and gatherings of persons known to discuss inanities.