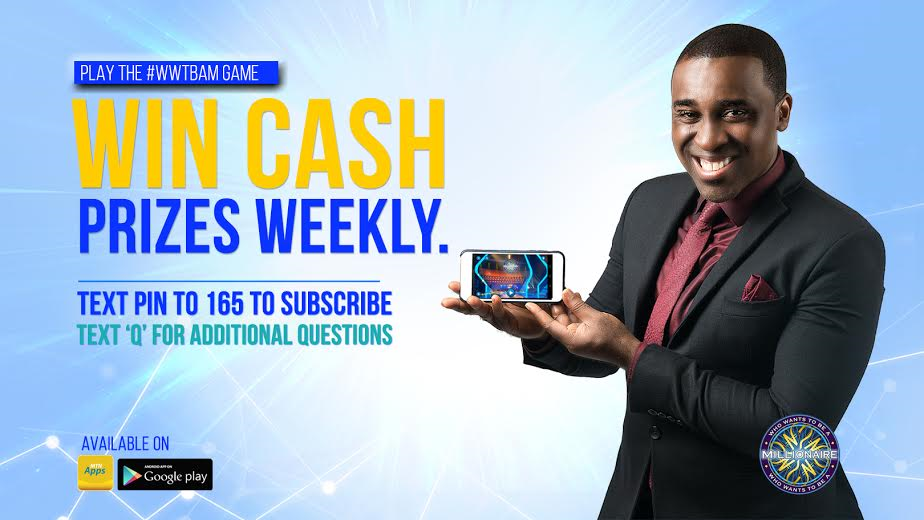 Widely-celebrated and highly-acclaimed TV game show Who Wants To Be A Millionaire has returned with N20 Million Grand Prize.

‘Who Wants To Be A Millionaire‘ is a Nigerian game show based on the original British version, known casually as “Millionaire’ and popularly called ‘WWTBAM’ in the literature space, aired for over 13 years from October 8, 2004, until September 2017 when it was temporarily put on hold.

The new ‘WWTBAM’ series tagged ‘The Rebirth’ will be hosted by Popular show host and broadcaster, Frank Edoho.

In the thirteen memorable years of gracing our screens, the show which enthralled TV audiences far and wide with its exciting and educating editions, boasted of formidable participants, a deep wealth of knowledge and one worthy winner of the staggering prize money of N10 million.

Aroma Ufodike became the first winner of the much-coveted top prize of this stupendous game show.

The millionaire game show, which has an intricate set of rules, hosts a group of contestants in each episode in a preliminary round called ‘Fastest Finger First’ where all contenders for the whooping prize money are given a question and four answers by the host, which must then be placed within a particular order.

The contestant who answers correctly in the fastest time goes on to play the main game.

Once a contestant enters the main game, they are asked increasingly difficult general knowledge questions by the host, with each question featuring four possible answers, to which the contestant must give the correct answer.

Doing this wins the contestant certain amounts of money as they advance in the game, hence increasing their prize fund.

How To Apply For Popular TV Show, Who Wants To Be A Millionaire

During the game, the player has a set of lifelines that they may use only once to help them with a question, as well as two “safety nets”.

These lifelines are: ’50/50′, where the computer eliminates two random wrong options, leaving the right option and the other remaining wrong option; ‘Phone a Friend’, where the contestant has 30 seconds to call one of their friends, read the question and four possible options to the friend, who then has the remaining time to offer input; and ‘Ask the Audience’, where audience members use touchpads to designate what they believe the correct option to be and the percentage of the audience choosing each specific option is displayed to the contestant.

Past winners of the show include Osazuwa Osahon Daniels, who went home with N5m in 2009; Aroma Chimuanya, who got N10m in 2009; Babatunde Oladipo, who walked away with N5m in 2010; and Nnaemeka Ubaekwena, who left the show N5m richer in 2012.

The show is sponsored by UP, a payments and financial technology company, in collaboration with BLK Hut Media, producers of the Nigerian version of the show, under the license of Sony Pictures.

The Managing Director of UP, Agada Apochi, stated that the show would create lasting memories for viewers.

He said, “We are sponsoring the show to entertain, educate and excite Nigerians. The return of WWTBAM is coming with a bang that would create lasting memories in the minds of audiences.

“It is going to keep them on the edge of their seats as new millionaires emerge from the show.”

The Chief Executive Officer of BLK HUT Media, Hakeem Condotti, also emphasised that the show would keep viewers glued to the edges of their seats.

He said, “We are proud to bring international quality content right to our screens again in Nigeria.

“As part of the much-needed relief from COVID-19 that we all need as a nation, ‘Who Wants To Be A Millionaire? Series 2 – The Rebirth’ is here to entertain, educate and have viewers on the edge of their seats.”

70 / 100
Powered by Rank Math SEO
Related Topics:Who Wants To Be A Millionaire
Up Next

Popular disc jockey, Kabiru Oladipupo, popularly known as DJ Silver, is the brain behind the project and vision of the “MAFO” Musical Concert.
Ogo Agege as fondly called was born in Agege Area of Lagos State, though hails from Oyo State from Isale Oja Agege. His passion for entertainment through music started in his early life while in Central Primary School, Agege. He proceeded his academic at Anwaru Islam College Agege before wrapping up his educational journey at Osun State Polytechnic, Ire Osun State.
DJ Silver who began his career in 2009 has built an admirable fan base of music lovers as well as a professional repertoire as one of the official DJs for an award winning radio station, Jordan 105.5fm Lagos.
He emerged the first official DJ to Club Ice, situated in GRA Ikeja, and without mincing words, he commands attention within the streets of Lagos and beyond with his crafts, he is a force to reckon with in the entertainment industry.
His musical concert titled “MAFO” is scheduled to hold on October 8, 2022 at the prestigious Agege stadium.
The musical concert is expected to attract prominent and household names in the music and political industry.
The concert is set to be a true musical delight, as different A list Nigerian artists are scheduled to thrill their audience.
In his words, he urges his fans and music lovers to be  optimistic about the event.
1 / 100
Powered by Rank Math SEO
Continue Reading

Sammek Moments Entertainment set to Tour US with Dotun Ogunlabi

The talented wave making Gospel Juju Tungba group known as Dotun Future (The Future Band) led by Dotun Ogunlabi in association with Sammek Moments Entertainment USA, will be hitting United States of America on a playing tour that will take them to 13 states including Maryland, Atlanta, New York, Houston,Chicago and a host of others.

According to the  organiser, a US-based music promotion company, Sammek Entertainment, owned by Mr. Samuel Ekundayo, several multi-faceted cultural events have been put together in partnership with the Alliance of Yoruba Organisations and Clubs and other well established cultural association and promoters in the USA and Nigeria to promote the values and morals of various Nigerian cultures while Dotun Future is in the US.

“As we all know, Nigeria encapsulates great and beautiful culture and tradition which need to be more jealously guided and promoted because of its many influences all over the world.“Therefore, the tour can be captioned Festival of Culture a viable platform to boost the cherished and rich culture.

The Future Band have been in existence for over two decades and have been dishing out deep cultural laced fusion of traditional beats spiced with inspirational and gospel vibes.The award winning band have thrilled in churches,social events across Nigeria with a well spread wide fans base. He recently returned from a successful tour of United Kingdom where his audience never had enough of his vocal and up beat music delivery.

While in United States, the band is expected to perform at various locations and events including, “Alujo Night” at STEVE ALLEN THEATRE 4773 HOLLYWOOD BLVD, LOS ANGELES CA 90027.

The beverage giant known for refreshing consumers with various flavors of revitalizing carbonated soft drinks, energy drinks, tasty on-the-go sausages and fruit drinks across the country and continent is the official beverage sponsor of this year’s Ojude-Oba festival.

The commendation came at a press conference which was held at the Awujale’s palace in Ijebu Ode on Friday to officially flag off the festival slated to hold on Monday, July 11th 2022 at the ancient town of Ijebu Ode.

Chief Dr. Fassy Yusuf, the Baagbimo of Ijebuland and festival coordinator, while speaking at the press conference said that Rite Foods Limited has demonstrated its commitment to promoting the cultural heritage of the Ijebu people through the sponsorship and urged the company to maintain its record of celebrating the peoples’ cultures.

“Rite Foods Limited has always come through for us in situations like this and we must commend them for the effort to promote the cultural heritage of our people. It is our prayer that the company keeps growing in leaps and bounds,” the festival coordinator echoed.

Boluwatife Adedugbe, Brand Manager, Beverage and Bakery, Rite Foods Limited restated her company’s commitment to the promotion of cultural heritage of its people and communities in which it operates. According to her, Rite Foods Limited prides itself as true sons of the soil by joining all sons and daughters of Ijebuland to celebrate the age long festival to honor the paramount ruler of the land.

“For us at Rite Foods Limited, Ojude-Oba is about celebrating the rich cultural heritage of the Ijebu people, most especially by paying homage to the paramount ruler of Ijebuland, His Royal Majesty, Oba Sikiru Kayode Adetona, Ogbagba II. We will always commit to celebrating the Ijebu people and our royal father who bestrides the traditional institution of his people like a colossus; he is an incorruptible leader and statesman who personifies a sagacious, courageous, charismatic, dependable and reliable leader which aligns with our values of excellence and integrity at Rite Foods Limited”, she stated.

The Brand Manager also used the occasion to announce that the festival will provide an opportunity for consumers to experience its newly launched refreshing Sosa fruit drink.

“The platform will be used as another avenue to make a laudable statement on the Rite Foods Ltd just launched refreshing Sosa Fruit Drink”, she added.  The sosa fruit drink is available in five flavors – Orange; Apple; Orange, Passion, Mango; Mixed Berries; and Cranberry. All flavors are available for consumers in 35cl and 1Litre packs.

The annual Ojude-Oba Festival is a spectacular celebration of the Ijebu nation of southwestern Nigeria. This age-long cultural heritage and festival of the Ijebus has been in existence for over 2 centuries and the festival is a classic example and manifestation of religious tolerance in Ijebu land.

The host of the festival, the Awujale of Ijebuland, HRM Oba Alaiyeluwa (Dr.) Sikiru Kayode Adetona (CFR) Ogbagba II, will be joined by the special guest of honor, the governor of Lagos State, Mr. Babajide Olusola Sanwoolu and other top dignitaries, traditional rulers and captains of industries from across the country.

Rite Foods Limited which prides itself as a company with the highest number of brands in its sector is set to win the hearts of multitudes of consumers from all walks of life with its array of refreshing brands to give quality satisfaction to all who would grace the Ojude-Oba Festival 2022.