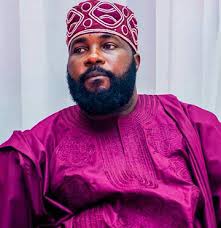 Indeed, it would not have been an exaggeration if he had been described
as the “King of Groove”.Multi-millionaire businessman, Gerald Anozobo, once ruled the social
scene.

While he “reigned”, he drove posh cars, wore expensive designer
watches and was a VIP card-carrying member of many A-list night clubs on the Lagos Island.

In fact, it was gathered that club owners could afford to shut any
other person out of their clubs as long as the man was around.

But suddenly, Azonobo’s face became a rarity at his regular hangouts
and social events.

This phase, no doubt, gave a lot of his friends a serious concern.

During this period of hiatus, many claimed that Azonobo was broke, while
some maintained that he was only trying to kick some old habits.

But one thing was obvious: many night clubs counted their losses with
his new found ‘lifestyle’

However, if you think the man is all about ‘groove, you are dead
wrong.

The real estate merchant has another passion, which is to help the youth
out of poverty and make them actualize their potentials. He has been
pursuing this through his KUTH Foundation.

According to the Foundation, eighty percent of the teenagers who
engage in drug addiction, cultism, prostitution, teenage pregnancy,
abortion, examination malpractices and rape are Secondary School Leavers
who failed WAEC at their first sitting and whose parents are unable to
re-enroll them for GCE due to lack of funds.

So, in the bid to curb the moral decadence that the society is faced
with, the Foundation mooted the idea of a back- to- school project to
the Foundation’s Board of Trustees.

Eventually, “KUTH back to School” project was approved, in line with
the Stay Alive Programme of the foundation, which has been ongoing since
2014 in some schools and churches across Lagos State.

Speaking on the Foundation, he said: “The idea behind “KUTH Back to
School” project is to make available free GCE forms to a minimum of
twenty (20) indigent students living within Amuwo Odofin LGA on a
regular basis.

“The portal for interested students was opened on August 5, and closed
on August 19, 2019.

“Despite the closure of the process, the number had to be increased to
twenty-five (25) due to the high number of applications we received. But
the new five (5) entrants were late entries.”

The pilot scheme of the project was flagged of on August 21, 2019 at
Frankkids Amusement Park, Festac Town, where Twenty-five (25) students
who met the Foundation’s criteria were formally presented with their
GCE forms.

In his goodwill message, the Founder/Principal Promoter of KUTH
Foundation, Azonobo enjoined the winners to be steadfast in their
studies, noting that education is the bedrock for a better future,
catalyst for social development and economic emancipation from the
shackles of poverty. He assured the participants that the student with
the best overall result will be offered a scholarship.

Today, billionaire oil mogul, Jubril Adewale Tinubu, has more than one reason to be joyous, apart from the grace to survive the mysteries of the last night.

Rising from his ornate massive bed to witness the dawn of a new beautiful day, his heart is filled with gratitude to God for the grace to mark his 55th birthday today.

The Group Chief Executive of Oando Plc, unlike some others, usually prefers to be reflective on a day as this for very good reasons.

As a result, reliable sources disclosed that the birthday celebrations would definitely be low-key; there would not be any carnival-like celebration.

Unlike some members of his billionaires’ class he is neither given to frivolities nor any form of revelry.

Nevertheless, his family members, friends, business associates, fans and admirers are sharing in his joy and ready to pour encomiums on him.

In the past years, JAT, as he is famously called, has touched several lives whose paths have crossed his in so many positive ways.

He is as generous, collaborative, and lovable as he is innovative and brilliant. The mogul has a large heart and loves to see others succeed. He has an innate belief that behind every success story are others helping to make it happen.

Probably because he keeps the cameras away during his altruistic gestures, many don’t know that he is one of the biggest philanthropists in Nigeria at the moment.

It is a fact that the King of Africa’s oil has eyes good investments. His convictions can move mountains and his determination can shatter ceilings. This, no doubts, has made him to have some edge over his competitors.

In the views of some observers, Tinubu’s continued relevance, nay staying power, should provoke some careful study by aspiring entrepreneurs or even established ones, especially in the Nigeria’s inclement business environment.

The highly cerebral business mogul has proven in all ramifications that the African continent does not lack talents who can hold their heads high anywhere in the world.

has over 15 years experience in marketing, hospitality and property management both in the United Kingdom and Nigeria.