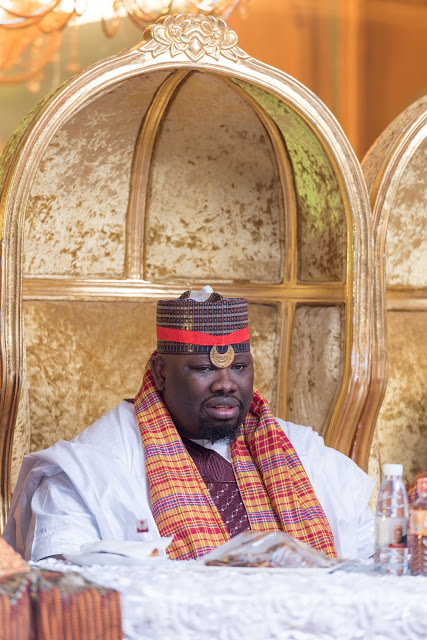 Billionaire businessman, Alhaji Nasiru Haladu Danu, is one of the top
players in the oil and gas sector in the country.

The Dan Amana Dutse of the Dutse Emirate in Jigawa State is said to be
influential and highly connected.

No wonder, his wedding to pretty Amne Kam Salem in December 2017 in
Abuja was graced by the crème of the society.

That was not the first time he had been honoured by a large number of
eminent personality in the country.

Earlier in 2017, he had made headlines when he was turbaned as the Dan
Amana Dutse, as several dignitaries witnessed the beautiful ceremony.

At both events, the revered monarch, Ooni of Ife, Oba Adeyeye Enitan
Ogunwusi, reportedly stood out and was very active. Those in the know
said their friendship had stood the test of time.

The Ooni of Ife, it was gathered, spent three days to felicitate with
the young, affable, and detribalized billionaire.

Danu, as a successful businessman, has built relationships and network
with other powerful Nigerians from every part of the country , including
President Muhammadu Buhari.

He has been in business for more than a decade and has made a success of
his endeavour.

Recently, his flagship company, Casiva, which is also into security,
civil and mechanical construction, supply and procurement, was listed
among the 15 consortium/companies awarded the 2019/2020 contracts for
the exchange of crude oil for imported petroleum products by the Nigerian National Petroleum Corporation, NNPC.

Soon after he was awarded the contract, some critics went to town with
insinuation that he made the great leap owing to his closeness to President Buhari.

But those close to Danu, a chieftain of the ruling APC, pooh-poohed the
claim by his critics, saying Danu ensured his company participated in
all the bidding processes, which made it possible for the NNPC to award
the company the DSDP contract out of over 130 companies that bidded.

In 2016, Danu’s company was awarded contract for the provision of
pipeline security and maintenance services along Kaduna-Kano and
Zaria-Gusau segments. It was learnt that rather than wait to be
mobilized as many others used to do, the businessman mobilised equipment and staff to commence work and was at the locations for over a year before NNPC paid his company. This, it was learnt, actually worked for
Danu, who obviously was rewarded for his integrity, trustworthiness and
sense of dedication.

The laudable Economic strides of the Administration of His Excellency, President Muhammadu Buhari, GCFR gained momentum at the Grand Opening of the flagship showroom of Oraimo Mobile Technologies Experience Centre called THE GREEN WORLD at Jabi Lake Mall, Abuja on Sunday, 15th of May, 2022.

Oraimo Mobile Technologies is the leading manufacturer of High Tech Smart Phones Accessories in Africa, and the company has conspicuously dominated the Nigerian market regarded as the largest in Africa. While welcoming various dignitaries who graced the occasion, the Managing Director of Oraimo Mobile Technologies, Mr. Chidi Okonkwo, emphasized the commitment of the company to first rate products that are not just durable but affordable for all Nigerians. He emphasized that Nigeria has come of age with a teeming population of Tech savvy young professionals and educated youth dominated population that can accommodate the siting of the largest Mobile Technologies Production factory in Africa.

Among the dignitaries that attended the occasion are Mr. Emeka Offor, Acting Executive Secretary of the Nigerian Investment Promotion Commission (NIPC); the team of the Corp Marshal of the Federal Roads Safety Corps, Dr. Boboye Oyeyemi; Nigeria Foreign Investors Forum led by Mr. Coker Yu-Du as well as friends and partners of Mr. Olusegun Adebayo who is the Promoter of the Flagship Showroom.

While responding, the Acting Executive Secretary of NIPC, Mr. Emeka Offor, commended the laudable contribution of Oraimo Mobile Technologies to Nigeria’s Economic Growth and Human Capital Development through direct foreign investments which has led to massive job creation. He further affirmed the commitment of the Federal Government of Nigeria to sustained reviews and implementation of sound Corporate and Financial Acts that will keep Nigeria as the Investment Hub of Choice in Africa.

Furthermore, he stated that the Administration of His Excellency, President Mohammadu Buhari, GCFR has provided the enabling environment for Investors around the world to thrive in Nigeria, and by implications, the NIPC is ready to support Oraimo Mobile Technologies to site their Production Factories in Nigeria and take advantage of the windows of opportunity that abound as incentives from NIPC. While boasting about the readiness of Nigeria to host oraimo factory, he said, “it is high time we stopped the importation of commodities into Nigeria. The time has come for production to be predominant in Nigeria, and from here, we will export to other African nations and the entire world. This is the aspiration of President Mohammadu Buhari, GCFR and we will give it every support required.

It was an amazement that the entrance of the showroom was completely blocked by hundreds of Loyalty Customers who thronged to Jabi Lake Mall, Abuja to await the opening of the Flagship Showroom. The crowd were entertained by Performances from the sensational Pheelz who thrilled everyone with the hit-song Finesse as well as the Prodigy Saxophonist, Temilayo Abodunrin, a talented teenager who showcased mastery as she played several songs with precise rendition. Several gifts such as Power Banks, Air Pods, Wireless Speakers, Smart Watches, Phone Chargers and a long list of items were given away to customers who indeed had a memorable experience.

NTT Global Destinations: Opening new Frontiers for Tourism and Business development between Nigeria and The Maldives

The Federal Republic of Nigeria and The Maldives are poised to commence a new era of tourism and business development in the coming months. This follows a recent Familiarization Tour of The Maldives by Ms. Elizabeth Agboola, the CEO/Founder of NTT Global Destinations and a team of legal, trade and cultural promotion specialists. The Tour was conducted from 29th March to 3rd April 2022 in association with International Maldives Travel Market (IMTM) and provided important insights into the prospects for tourism and trade between Nigeria and the Maldives.

Although Nigerians have been visiting The Maldives for decades, there is still much to be discovered in relation to this pearl of the Indian Ocean, that is ranked among the top tourism destinations in the world. Ms. Agboola has declared that, ‘’Every Nigerian should have a chance to experience the Maldivian dream and NTT Global Destinations is ready to take them there”.

The Maldives has been dubbed COVID-19 pandemic winners having copped the World’s Leading Destination Award in 2020 and 2021.

The Familiarization Tour provided an opportunity for the NTT team to visit guest houses in the capital Male as well as in other islands including Maafushi, Hudhuranfushi, Olhuveli and Maamigilli. In each location the team was able to sample the delightful cuisine as well as the variety of attractions and accommodation facilities ranging from high end luxury hotels to guest houses on both local islands and resort islands. The team was also able to experience ‘’island hopping’’ by speed boat and domestic flights.

The team also took note of the prospects for making Nigerian goods and services available to enterprises in the Maldives, especially in the areas of food, fashion and entertainment. This is among the elements being discussed with H.E Muhammed Bello Abioye, the Nigerian Ambassador to The Maldives. There is scope for bringing businesses from Nigeria and the Maldives together via trade fairs, B2B encounters, cultural events and other promotional mechanisms.

Among the highlights of the Tour were the scheduled meeting between the NTT Team and Minister of Tourism – Dr. Abdullah Mausoom, as well as engagements with Mr Rafil Mohammed, The Executive Director of The Maldives Association of Tourism Industry (MATI) – the oldest tourism association in The Maldives and Mr. Thoyyib Mohammed, The Managing Director of Maldives Marketing and Public Relations Corporation (MMPRC).

The Minister outlined his vision for tourism development in The Maldives and expressed the hope that Nigerian tourists would soon play a prominent role in the growth and expansion of the industry. The Minister further stated that, ‘’as The Maldives celebrates its Golden Year of Tourism in 2022, outreach to an important market like Nigeria is critical and would be further enhanced, with the introduction of direct air connections’’.

NTT Global Destinations has crafted destination marketing plans for the Maldives, in partnership with Nigerian tour operators and will spearhead efforts to introduce direct charter flights in the near future.

In addition to its established place in global tourism, The Maldives is also a leader in Muslim friendly travel experiences. It caters extensively to halal food, private villas, exclusive sand banks and an abundance of mosques and designated places for prayer.

Ms. Agboola is enthused at the positive response to the packages for The Maldives and strongly encourages everyone to ‘’sign up early to avoid missing out on the special rates on offer by all our tour operators, for both leisure and halal packages’’.

The Maldives is a visa free destination for Nigerians and the government has removed the requirement for a COVID Test as a condition for entry.

Adron Homes and Properties, a leading player in the real estate industry gives back to her landlords.

In commemoration of her tenth anniversary, the company decided to embark on giving back to society especially her clients who had stood and believed in the company as well as keyed into her numerous housing (estates) projects across the country and beyond.

The Group Managing Director, Aare Adetola Emmanuelking seized the opportunity to reiterate the company’s vision of making the incredible affordable by ensuring quality shelter for everyone.

In a statement, Aare Adetola Emmanuel King stated that ” Adron is poised at bridging the housing deficit gap in the country and beyond”

He attributed the company’s success as one of the leading players in the real estate industry with dozens of mega estates across the country to the trust and confidence the company enjoys from clients and prospects.

A team of management staff led by the Director of Brand and Business Development, Barr, Alonge Tola made surprise visits to some of the company’s estates, alongside Mr. Kazeem (JIGAN) one of the Brand ambassadors for Adron Homes, which added more elements of surprise and glamour during the visits to numerous landlords.

Jigan handed the landlords gifts packs in commemoration of the anniversary.

The landlords were full of excitement to see their Nollywood celebrity standing just in front of their doors, they expressed their gratitude to Adron Homes for the act and also for matching words with action, especially in regards to infrastructures at their different estates they commended the company for ensuring uninterrupted power supply.

The excitement in the faces of the numerous landlords whom we visited was glaring as they received the gift items and gave their appreciation speeches and some even became emotional.