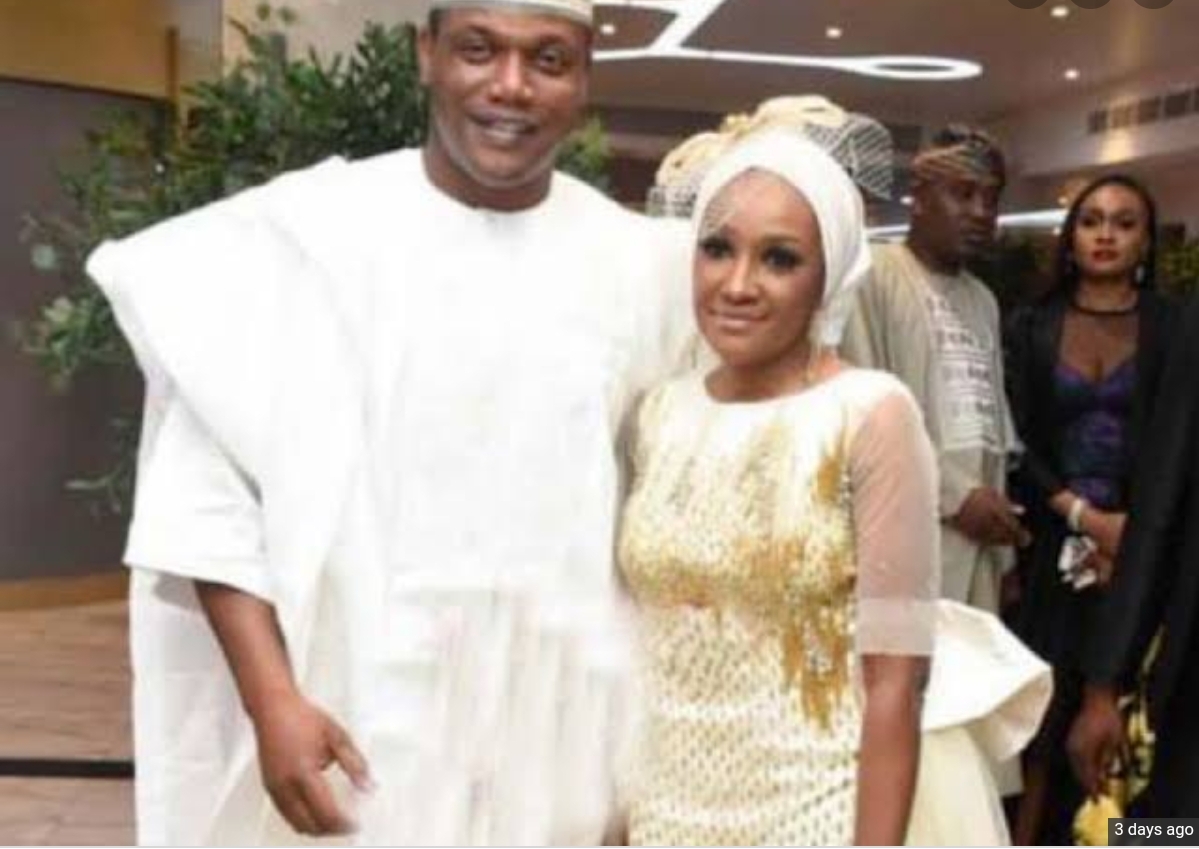 It was Richard Bach who said:  “True love stories never have endings.”

When you read the compelling story of Mohammed Babangida and his wife, Umma, daughter of Ambassador Aminu Wali, a former Nigerian Envoy to the United States, you will understand better.

It all dates back to over 23 years ago, when both met through , their mutual friend.

At that time, Umma was a young undergraduate at Bayero University, BUK, Kano. She later travelled to the United Kingdom to further her studies.

But before she moved to the United Kingdom, the Babangida scion had expressed his desire to marry Umma. So seriously involved was he with her that he even gave her a diamond ring, as a symbol of his commitment to her.

Unfortunately, the relationship suffered a big crash when their parents, reportedly, opposed their affair.

As a result of this unpleasant development, the handsome dude later got married to his “approved” wife, Rahama Indimi, daughter of Borno State-born oil magnate, Alhaji Mohammed Indimi, in an elaborate wedding that had many top personalities in attendance.

But just as the saying by Richard Bach, Mohammed’s love for Ummah never ends; he still has his heart with her.  In 2008, he was able to convince their parents and married her.

However, the marriage seemed like a mistake at the beginning, as his first wife, Rahama, would not have any of it.

The mother of four was forced to leave  her Minna matrimonial home for several months and moved into her father’s home in Abuja. Later, she was pacified and persuaded into moving back to her home. However, Rahama was said to have refused to accept Umma.

The rivalry between the two wives was intense and bitter.  Reason: Babangida  reportedly didn’t help matter as he pitched his tent with Rahama who showcased her superiority tendencies. This development made Umma to be very bitter and unhappy.

She couldn’t cope with the powerful forces that confronted her home, with the realisation that she failed to have a child in the marriage.

Eventually, when she could no longer cope, she decided to move out of her matrimonial home again. But Mohammed ran back to her and brought her back home.  This, again, infuriated the daughter of the oil mogul that she finally left home.

Luckily, beautiful Umma had reason to smile again as she finally had her baby in 2017.

Today, the Kano State-born beauty is enjoying the love of her life. Last week, the woman stepped out with her husband for the birthday bash of stylish woman, Hajia Bola Shagaya.

We gathered that was the first time they would have been seen together publicly after a very long time.

They were seen holding each other hands and smiling like young lovers that have just fallen in love for the first time.

Another Exciting chapter in US based, Lola Fashina’s Memoirs

Today, billionaire oil mogul, Jubril Adewale Tinubu, has more than one reason to be joyous, apart from the grace to survive the mysteries of the last night.

Rising from his ornate massive bed to witness the dawn of a new beautiful day, his heart is filled with gratitude to God for the grace to mark his 55th birthday today.

The Group Chief Executive of Oando Plc, unlike some others, usually prefers to be reflective on a day as this for very good reasons.

As a result, reliable sources disclosed that the birthday celebrations would definitely be low-key; there would not be any carnival-like celebration.

Unlike some members of his billionaires’ class he is neither given to frivolities nor any form of revelry.

Nevertheless, his family members, friends, business associates, fans and admirers are sharing in his joy and ready to pour encomiums on him.

In the past years, JAT, as he is famously called, has touched several lives whose paths have crossed his in so many positive ways.

He is as generous, collaborative, and lovable as he is innovative and brilliant. The mogul has a large heart and loves to see others succeed. He has an innate belief that behind every success story are others helping to make it happen.

Probably because he keeps the cameras away during his altruistic gestures, many don’t know that he is one of the biggest philanthropists in Nigeria at the moment.

It is a fact that the King of Africa’s oil has eyes good investments. His convictions can move mountains and his determination can shatter ceilings. This, no doubts, has made him to have some edge over his competitors.

In the views of some observers, Tinubu’s continued relevance, nay staying power, should provoke some careful study by aspiring entrepreneurs or even established ones, especially in the Nigeria’s inclement business environment.

The highly cerebral business mogul has proven in all ramifications that the African continent does not lack talents who can hold their heads high anywhere in the world.

has over 15 years experience in marketing, hospitality and property management both in the United Kingdom and Nigeria.