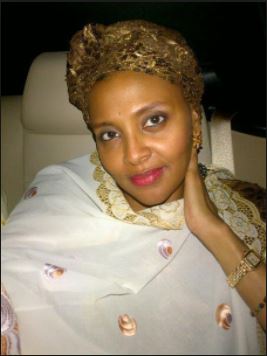 At a point in time, beautiful Gumsu Fatima Abacha and  Cameroon-born billionaire, Bayero Fadil Mohamadou, were are an item.

With both, you could smell love even from several miles; and their romantic affairs had made them the envy of many.

Having studied each other like a book and felt comfortable to spend the rest of their lives together, they took their relationship a step further by settling down as husband and wife in 1999.

For 20 years, they made many celebrities go green with envy, and theirs was regarded as a marriage made in heaven.

Gumsu Fatima, the  lovely daughter of the late military dictator, General Sani Abacha, was in her own world, having the best of her status as a married woman.

Indeed,  she never wasted any opportunity to flaunt her handsome hubby either on their wedding anniversary or his birthday.

In return, her husband, a graduate of the Bates Collège in Lewiston Maine and the Polytechnic Institute of Brooklyn in New York City, showered her with money, gifts and  love.

It will be recalled that, when she turned 42 two years ago, her billionaire hubby organised a little party at the Pullman Douala Rabingha Hotel in Cameroon for her.  It was one of the  most classy birthday parties ever.

In fact, a source  close to the couple said the love for each other was infectious, as Bayero treated her like a princess, and sent her flowers all the time.

However, all that stopped towards the end of 2019  when Bayero, updated his Wikipedia profile and stunned everyone with the news of his breakup with Gumsu due to irreconcilable differences.

That  sour development in the hitherto blissful home came exactly 20 years after they tied the knots at a grand ceremony in Kano.

In-between those two decades of marital odyssey, they had five children and they are expected to co-parent peacefully.

But if you think the mother of five is still sulking  over her failed marriage, you are totally wrong , as she is said to have moved  on.