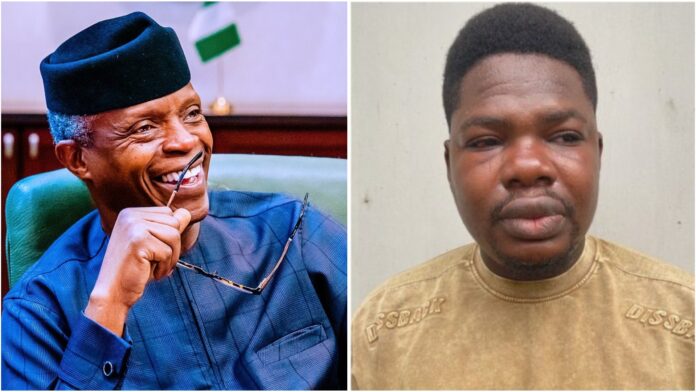 Popular skit maker Mr Macaroni appears to have been blacklisted by the President Muhammadu Buhari-led government, as Vice President Yemi Osinbajo left him out of a meeting he should have been included.

Osinbajo, on Wednesday, November 3, 2021, met other Nigerian Instagram comedians under the auspices of Nigeria Skits Industry Awards (NSIA) but left Mr Macaroni out.

This development may not be surprising to many people, as Crystal News also understands that Mr Macaroni is a strong critic of the incumbent administration.

The comedian, who’s known for his Daddy Wa character in viral social media skits, is known for lending his voice against oppression, especially as it relates to police brutality.

During the #EndSARS protests that shut down the entire country last year (2020), Mr Macaroni led a group of other protesters to the infamous Lekki Tollgate, during which he was arrested and tortured.

While expressing his ordeal in the hands of men of the Nigeria Police Force (NPF) after he was arrested for demonstrating his civil rights, he stated: “If the word was not out that people were already being arrested, people would have died. They were telling us that ‘we’ll shoot you and nothing will happen‘. I’m sure if this was at night, we would have all died.

“They took us to Adeniji where we were beaten and stripped naked. Everyone was beaten. These people didn’t care about anyone. They beat me, saying I’ll have a sense by force. They also destroyed my phone.

“So, we’re in a serious shame but it’s not to silence our voices. They cannot continue to oppress. Those of us that have the voice will continue to talk.

“Have we gotten justice for what happened last year? Is opening the tollgate the next line of action?” Mr Macaroni queried.

“Why I think this engagement (with skit comedians) is important is because this is the way to go. Let us sit down and look at all the issues and come out with realistic positions that can then become policies, and what sort of support will be required,” Osinbajo stated.