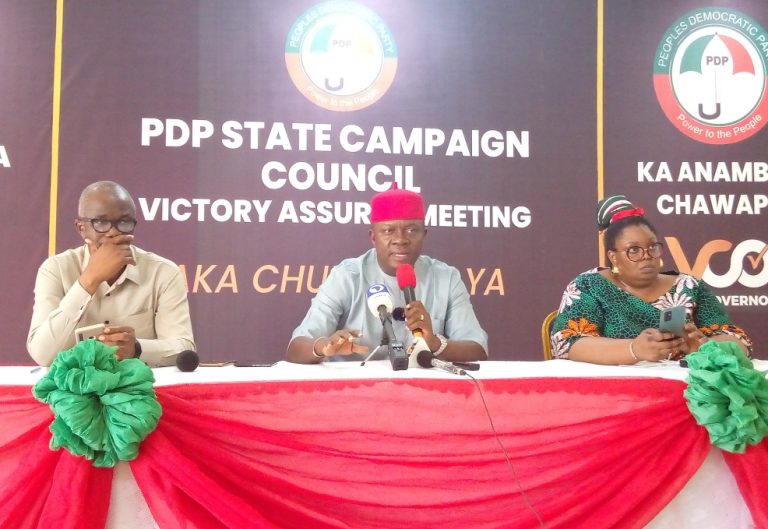 Mr Valentine Ozigbo, the candidate of the Peoples Democratic Party (PDP) in the ongoing Anambra governorship election, has said that the contest is not over and remains “winnable“ for him.

Ozigbo stated this whole speaking at a news conference in Awka on Monday.

He expressed the hope that the PDP would close the gap if electoral officials and materials were effectively deployed on time for the supplementary election in Ihiala Local Government Area (LGA), slated for Nov. 9.

Crystal News reports that the Independent National Electoral Commission (INEC) on Sunday night suspended the Anambra election after releasing results of 20 out of the 21 LGAs, except Ihiala.

According to INEC, the top parties and their scores were, All Progressives Grand Alliance (APGA), 103,946, PDP-51,322, All Progressives Congress (APC) 42,942 and Young Progressives Party- 20,917
Ozigbo said the Anambra election would continue beyond Tuesday provided the margin of lead was less than the number of registered voters in places where there was proof that elections did not hold.

He said Ihiala alone could upturn the result with the level of awareness going on, adding that INEC must ensure that voters did not encounter the frustration they had on Saturday again by making sure that proper deployment was made and machines were functional.

“I want to assure the good people of Anambra that the election is not over, it is still winnable for us, the PDP.

“The over 248,000 votes in Ihiala tomorrow and other places is enough to change the situation, I call on our people to remain hopeful and make it possible by coming out to vote.

“There was no low turnout of voters on Saturday, what we had was technology induced challenges which denied many people the opportunity to vote.

“While we commend INEC for their effort to improve the electoral process with technology, we want to acknowledge the imperfection that marred the exercise, it was a big experiment we did not deserve,” he said.

Ozigbo blamed ‘denominational’ and ‘money’ politics for the current outcome of the process while calling on Anambra electorate to de-emphase them in order to get the best of the contestants.