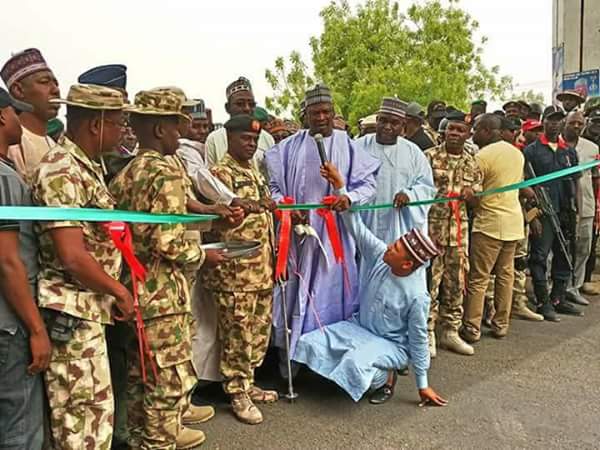 Governor Babagana Zulum of Borno State has reopened the 76-kilometre Bama-Banki road to restore business activities between Nigeria and the neighbouring countries of Cameroon and Chad.

The road was closed in 2012, due to activities of the Boko Haram insurgents.

Speaking at the ceremony on Wednesday in Bama, Zulum said that no meaningful development could be achieved in the recovered areas without restoration of business activities.

He lauded the President Muhammadu Buhari-led administration for its commitment towards restoration of peace in Borno.

The Governor noted that the efforts put up by the military in the state had led to the expansion of farming activities this year in the hitherto no-go areas.

“This year, areas under cultivation in Borno have increased by 600 per cent. By next year, we will go beyond what we achieved this year,” Zulum said.

In his address of welcome, Chairman of Bama Local Government Council, Alhaji Aji-Kolo Kachalla, lauded the development, describing it as a big relief to the people of the area known for business activities.

Also speaking, the Joint Task Force Commander, “Operation Hadin Kai”, Major General Christopher Musa, said that the development was another victory in the quest by the military to ensure peace and normalcy in the state and other parts of North-East zone.

Musa commended the government and people of Borno for their cooperation and support to the military and other security agencies.

He assured of the military’s commitment towards delivering on its mandate.