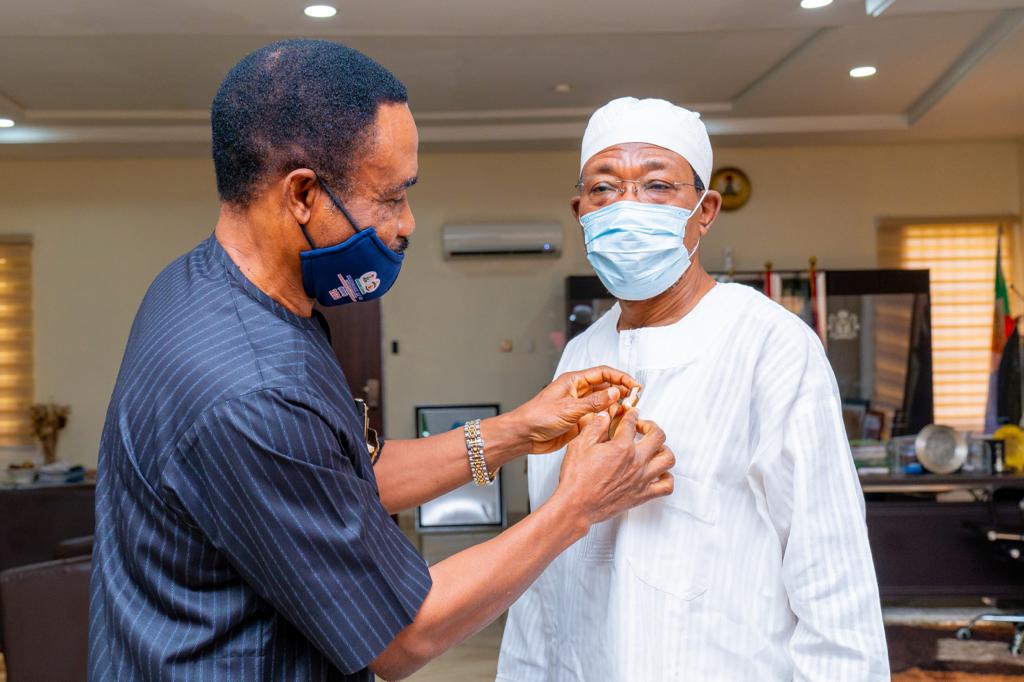 Nigerians have been encouraged as a matter of self will, to deliberately show passionate love and compassion to all veterans in their different categories.

These include those who are retired, those with varying degrees of injuries, and especially those who have had to lay down their lives in patriotic service to their fatherland by paying the Supreme Price.

The Minister of Interior, Ogbeni Rauf Aregbesola stated this during his decoration and that of the Permanent Secretary, Dr. Shuaib Belgore with the Armed Forces Remembrance Day Celebration (AFRDC) Emblem 2022 by a team from the Ministry of Defence (MOD) and the Nigerian Legion in his office, Friday, 12 November 2021 in Abuja.

Aregbesola spoke of the need for Nigerians to reward, “our ex-servicemen that had fought gallantly in ensuring the peace we enjoy and also volunteering to defend our territories in times of interventions and peacekeeping operations.

“Veterans include the old and retired military and paramilitary officers, those who fought in battles, while some are heavily injured and incapacitated, others die, paying the ultimate supreme price in the line of duty defending our nation. All of these veterans need to be celebrated.

“Moreso, educational scholarship is being recommended for at least a sizable number of children of these veterans to attain their educational desires to any height”.

The Minister also noted that ex-servicemen should be commended and celebrated in addition to making adequate and deliberate plans to cater for their dependants and widows who passionately need to be assisted.

Aregbesola cited an instance where a veteran military officer who has been incapacitated during battles should not be left to his fate considering the fact that he has dependants who need to be assisted during his incapacitation, and inability to manage them.

“We must celebrate those who volunteer their lives for the protection of our peaceful living and our national territory,” Aregbesola added.

The Permanent Secretary, Dr Shuaib Belgore in his welcome remarks said that it feels pleasant receiving members of the Nigerian Legion, adding that the responsibilities with which the Legion has been saddled with over the decades is tremendous.

Belgore further stated that the, “Ministry of Interior is ready to partner with the Nigerian Legion in the preparation for the Armed Forces Remembrance Day celebration activities”.

The Leader of the delegation, Group Captain Kayode Abe commended the Minister of Interior and his team for their annual support to the course and upliftment of the Nigerian Legion and its activities.

The Nigerian Legion is statutorily in charge of ex-servicemen, those still living or widows, children of dead officers and their dependents

The Leader of the delegation, Group Captain Kayode Abe (rtd) thereafter decorated the Minister and the Permanent Secretary, while Dr. Aisha Salihu Lemu decorated the Directors as well. It was a colorful ceremony which shall be rounded off on 15th January 2022 by President Muhammad Buhari in Abuja at the Cenotaph during the wreath-laying ceremony.