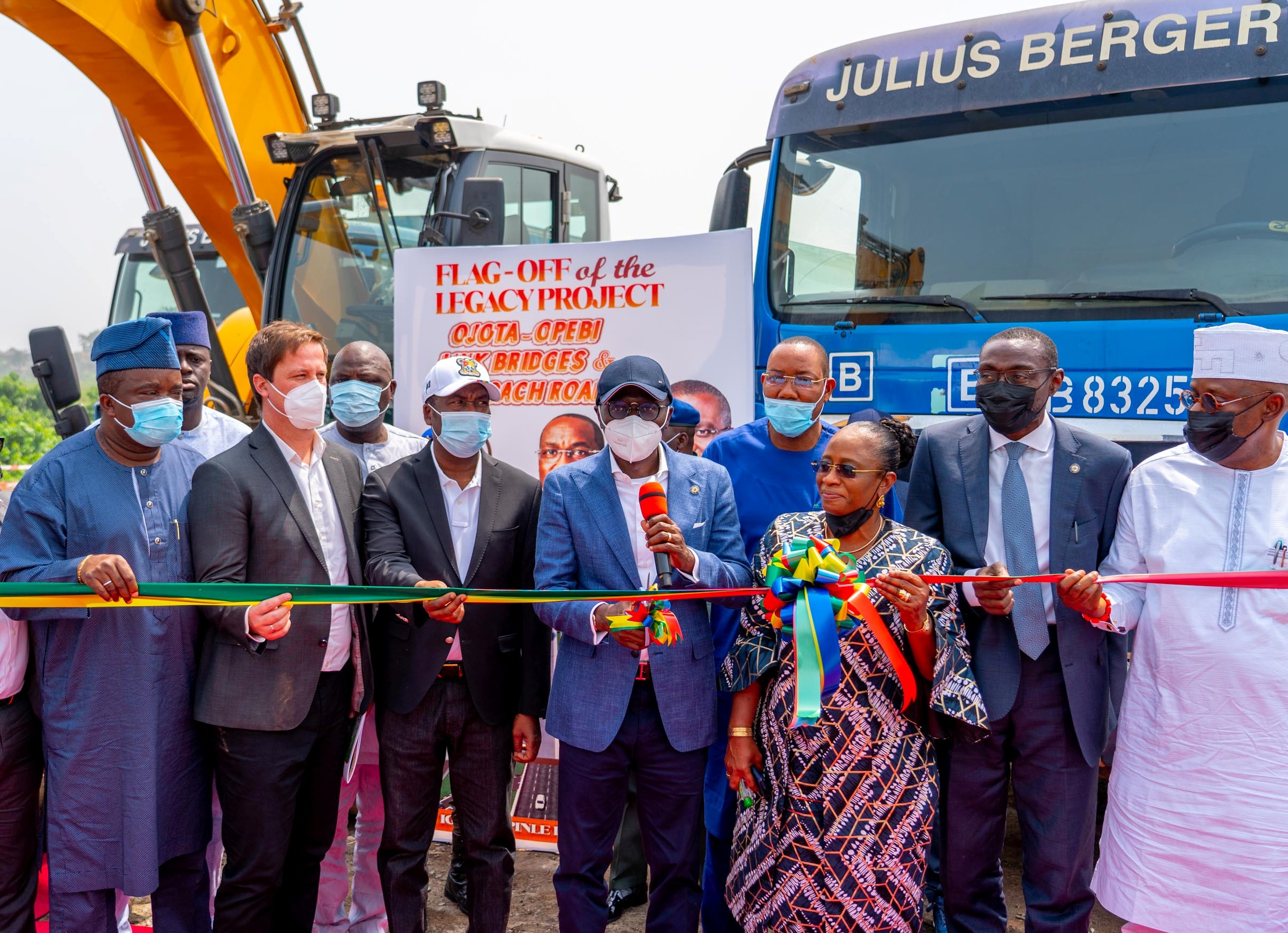 A traffic solution proposed 20 years ago to ease off perennial gridlocks that usually stretch from Sheraton Link Road into Opebi corridor has today become a reality, as Lagos State Governor Babajide Sanwo-Olu flagged off the construction of a carriageway that will solve major traffic conflicts in Ikeja.

The 3.89 kilometre-long road infrastructure will open into Ojota axis in Kosofe, taking traffic from Opebi U-Turn and dropping it at Ikorodu Road via intersection that will be constructed under Odo Iya Alaro Bridge at Mende.

The road will be supported by 276 metre-long deck-on-pile bridge and 474 metre-long mechanically stabilised earth-wall approach sections.

The carriageway, which is a new connectivity, would create an easy exit for commuters leaving Ikeja-Onigbongbo axis towards Ojota and Maryland.

The project was initiated to proffer permanent solution to inadequacies of Opebi Link Bridge and the Opebi U-Turn and to ease pressure on overburdened routes within Ikeja, with the objective to reduce travel time along the corridor.

At the groundbreaking event, Sanwo-Olu also announced that the State Government had successfully procured additional three sets of train for the Lagos Blue Line Rail project expected to be completed before the end of the year. The rail line traverses Okokomaiko and Marina.

Lagos State Governor, Mr. Babajide Sanwo-Olu addressing residents, traditional rulers, members of the State Executive Council and stakeholders during the Flag Off of the Ojota-Opebi Link Bridges and Approach roads, on Wednesday, 26 January 2022.

The news came a week after the Governor completed the deal for the procurement of two Talgo trains in Milwaukee, Wisconsin in the United States (U.S.) for the Lagos Red Rail Line project, stretching 37-kilometre from Abule Egba into Oyingbo.

Speaking on the road infrastructure, Sanwo-Olu described the project as “another landmark progress” recorded by his administration towards delivering requisite infrastructure in Lagos. The ceremony, he said, demonstrated the priority accorded the welfare and well-being of the residents in line with his Government’s drive towards delivering a Greater Lagos Vision.

He said: “This flag-off ceremony demonstrates the priority we accord the well-being of the people of Lagos, as we are witnessing another milestone in the implementation of the Traffic Management and Transportation Pillar of our administration’s THEMES Agenda and the State Strategic Transport Master Plan (STMP). Prior to this project, there was no direct road linkage between Opebi, Maryland and Ojota. Available roads linking the areas are limited in connectivity options, thus paving the way for the high traffic volume and congestion within the Ikeja traffic network.

“We recognised the need to create permanent solution to the conflicts by initiating another legacy construction project linking Ojota, Opebi and approach roads to connect Opebi Road from its tail end with Ikorodu Road by Odo Iya Alaro. Upon completion, the carriageway will reduce travel time for Lagos and Ikorodu-bound traffic from Opebi. It will also ease the traffic situation at Opebi-Sheraton Link Road and Mobolaji Bank Anthony Way. This legacy project will not only provide a new link to commute around Ikeja and its environs, it will also enhance economic prosperity and life expectancy.”

The Governor stressed that Messr Julius Berger was favoured as preferred contractor for the iconic project, given the civil engineering firm’s capacity and track record in construction on swampy terrains.

Since his administration came on board, Sanwo-Olu said 65 road projects and dozens of junction improvement work have been completed, while over 50 road infrastructure projects were at various stages of completion across the State.

He added that the State Government’s traffic improvement work was being complemented with constant road maintenance. He disclosed that over 832 arterial and tertiary roads, covering 252 kilometres, had been rehabilitated through routine palliative activities by the Lagos Public Works Corporation.

He said: “This is to demonstrate that politics is not about lip service. We have committed substantial resources to the provision of quality roads, waterways, and rail infrastructure to the people of Lagos, just as we have invested in modernisation of infrastructure inherited from the previous administration.

“To give the people commuting options, we initiated the construction of a 37 km track rail project which is steadily progressing, in addition to the complete overhaul of our water transportation system so that we can achieve an efficient and safe transport system that suits our megacity status and befits a 21st century economy.”

Special Adviser to the Governor on Works and Infrastructure, Engr. Aramide Adeyoye, said Julius Berger carried out extensive studies and engineering investigations along the project alignment two decades ago, prompting the State Government to take proceed with the construction.

She said the Governor remained determined to ensure that the project did not end up being abandoned, stressing that necessary funding mechanism had been secured to guarantee the project’s timely completion.

“Aside providing direct link between Opebi and Mende, Maryland and Ojota, this project also has two underpasses and U-Turn that will provide access for Ojota to Ikorodu as well as for Opebi-bound commuters. There is also provision for another underpass U-Turn for Phase 2 of Opebi Link Bridge Project which would eventually set a precedence for Ojota commuters to link the Third Axial Road,” Adeyoye said.

Member Representing Ikeja Federal Constituency, Hon. James Faleke, who led residents to the flag-off, described the project as “a surprise gift” to Ikeja community, praising the Governor for his vision to open up the swampy channel.