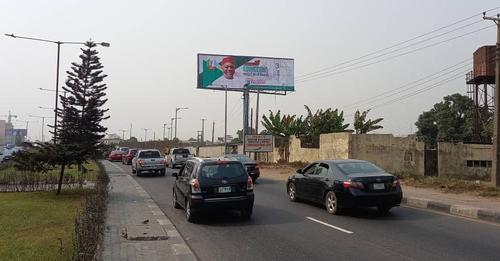 Large billboards with the name and picture of Chief Whip of the Senate, Senator Orji Uzor Kalu have emerged in major city centers of Lagos State, Southwestern Nigeria.

This is amid the clamor for the emergence of a Nigerian President from the Southeastern part of the country, Senator Orji Uzor Kalu is among the top list of prominent Igbo leaders who have indicated in vying for the No1 seat in the country.

The banner which was mounted at the populous junction also had the logo of the ruling All Progressive’s Congress (APC) logo inscribed on it. It also has the name of the support group which reads ” Southwest Youth Movement”.

The former Abia Governor is among the top contenders from the South-East who political stakeholders as well as analysts tout as the dark horse in the 2023 Presidential race, he is also being tipped as President Buhari’s favored candidate.

Prior and after his declaration Orji Kalu has received massive endorsements from notable groups around the country while some groups have also embarked on mobilization on his behalf.

In Bauchi state, a Northern Youth Movement for Orji Kalu, a political support group for the former Abia state governor, pasted his posters on major streets and houses in Bauchi state for the 2023 president.

The posters were sighted in the Emir’s Palace roundabout, Central Market, Awalah, Fire Service, Jos Road, and several other places in the state.

Similarly, a group under the auspices of Arewa Youths for Orji Uzor Kalu (AYOUK), unveiled a platform to mobilize 30 million youths across the 19 Northern states and Federal Capital Territory (FCT) in solidarity with the former Abia state governor as the only trusted candidate who can consolidate the gains of President Muhammadu Buhari.

The coalition of Northern Youth has launched an awareness campaign to galvanize support for the Chief Whip of the Senate, Dr. Orji Uzor Kalu ahead of the 2023 presidential election in Nasarawa state.